Earlier this month, I attended the Forever Young party, held at Temple Am Echad in Lynbrook, New York this year. The event was sold out, and all showed up properly outfitted in requested formal attire. Coat check was provided in the foyer, revealing women draped in gowns and men in fitted suits. Guests were invited to sample a colorful buffet of appetizers provided by Kwizine Art. 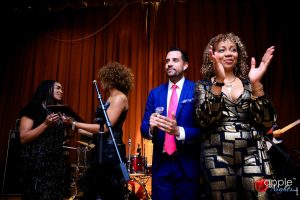 From the foyer, attendees were ushered into the main hall. Tables were set for the sit-down dinner to come, place settings elegantly marked by black cloth napkins folded into wine glasses. On stage were the instruments that would accompany popular singer Rutshelle Guillaume and legend Emeline Michel to perform later that night.

DJ Magic Kenny set the mood with Caribbean favorites as guests settled in and lined up for drinks at the bar with offerings that included a light blue cocktail aptly named the Bassin Bleu. MC Freddy Boom-Boom of Boom-Boom Entertainment NYC welcomed guests.

I got the chance to interview Freddy and co-producer of Forever Young, Kenna Lucien, of Kwizine Art. Kenna explained that she had been doing the party for over 10 years, but decided a few years ago that she “needed a kick” and that Freddy was the right man for the job. “I needed a change,” she said. “So I did it, and now my customers love it. They love it. They love him.”

Freddy added, “It’s been a great adventure, and I think we both thrive in that type of environment. . . It’s really how can we enhance the experience for our guests and our patrons. . . With every event Kenna’s done, she’s really tried to incorporate things that are going to make her guests happy and feel that they are receiving some entertainment that’s unique and a little different from what they’re going to get from the guy next door. And I think that’s why the marriage was so great between Boom-Boom Entertainment and Kwizine Art.”

Curious to know more about Kwizine Art, established seventeen years ago, I asked Kenna how she got into the food business. She explained that cooking was not something she was interested in initially, “Growing up I used to get punished because I didn’t want to be in the kitchen. However, I was always into the artistic part of it. The vegetables because of the colors. I always had that obsession with colors because, to me, I was always able to create something. . . I would put this color here, this color here, and create something.”

Once Kenna moved to the United States, her mother no longer by her side, she necessarily began cooking for herself. Always interested in entertaining, she began cooking for friends, co-workers, and even the clients she served in her previous field of mental health. One day, after taking some of Kenna’s cheesecake to her job, one of Kenna’s staff members called to ask how much she was selling her cake for. Surprised by the question, Kenna told her that she wasn’t selling it. Her friend replied, “Yes, you are because they love them at my job.” “And that’s basically how I started in the business,” said Kenna. “And ever since, it’s been a passion. I love it.” 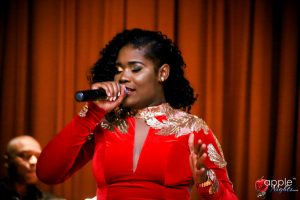 Speaking about the Forever Young party, in particular, Kenna said, “This event, it means the world to me because, to me, it’s a women’s movement. As a woman in business. . . a lot of times when I do my event, I try to bring in different women talent because you know what? In the Haitian community, the Haitian men, you know, there’s Konpa . . . there are these different things. But the women, there are a lot of them that are trying, but not the support to keep pushing them.”

Focusing on singer Rutshelle Guillaume, Kenna added “. . . When I first met Rutshelle, I said every twenty years or so, we have a new Emeline Michel because it’s almost like only one of them is allowed to move forward. Although I think it’s changing now because there are so many of them, but . . . they put a lot on you for being part of the entertainment world, so for them to be doing what they’re doing. . . they’re on it. Rutshelle is on it. Rutshelle is strong. She has been through a lot, and she still stands strong. . .”

Following a set from DJ Bonny, giving guests the opportunity to utilize the dance floor, Rutshelle took the stage. The guests loved her, singing along with her for much of her performance. “Je Suis” was a particular audience favorite. To further honor Kenna’s birthday, Rutshelle sang Happy Birthday to her as she emerged from backstage in an elegant black gown.

Emeline Michel was the second act. I had the great opportunity to speak with her earlier in the evening. When I asked her about her musical beginnings, Emeline spoke about her introduction to music by way of her church choir, then winning her first contest and a scholarship to study music in Detroit, Michigan. She spoke about meeting and observing the hard work of such greats as Anita Baker and Whitney Houston. And she spoke of her first number one hit, “Flanm”, the song that launched her international career.
She expressed a dedication to sharing with the world a side of Haiti that is far from the dismal picture we usually see on the news. “My country has something very magical,” she said. “You take a plane after all . . . that you hear and the images. You get there. There is something that is genuine from Haitian people, the way they welcome you, the smile . . . [Y]ou see the countryside where it’s still all green . . . You’re welcomed to share the coffee, the food they’re making. It’s the culture of not saving it for yourself . . . ”

And Emeline explained how her country’s physical beauty and traditions inspire her personally as an artist, “ . . . For me, I don’t know, the breeze, . . . when the sun sets, I’m just like: What am i doing? Because I just realize how simple, natural, and enchanting it is just living and being there in Haiti. So this is in a song. And there’s also the storytelling. In Haiti, Haiti has a very strong oral tradition . . . always there’s a joke in a song, that is right in the middle of a song. I use that a lot as a tool in my writing, and . . . we have proverbs that make you laugh . . . It’s really all of that together that . . . makes us a very strong culture. And that’s what I come with in my music . . .”  And that’s what she brought to Forever Young. 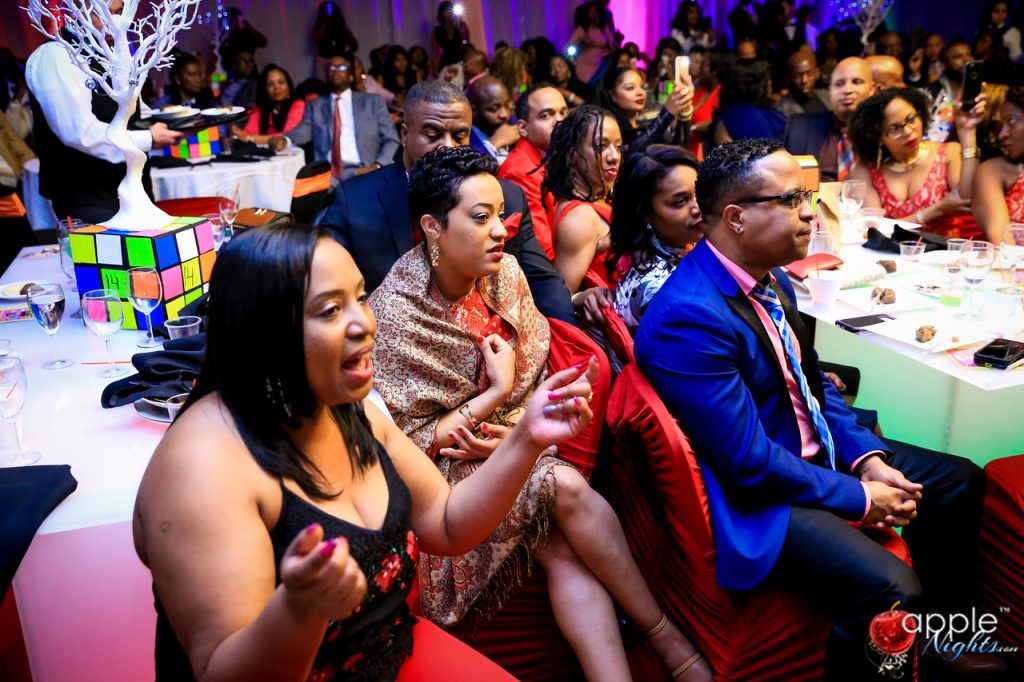