Help me Make it Through the Night

Esteem – A Restraining Order Against Comparison

Start with Yourself First

“I refuse to settle and dumb down my music it would defeat the purpose of my journey” says Farrah Boulé.

It is so easy to give up and change our mind on what we really want when things are not going the way we want. Eline magazine is proud to present to you an exceptional woman who was willing to open her heart and share her story with Eline magazine.  She believed in what she was going to be in life, now she’s living her dream and she’s not leaving her roots behind. 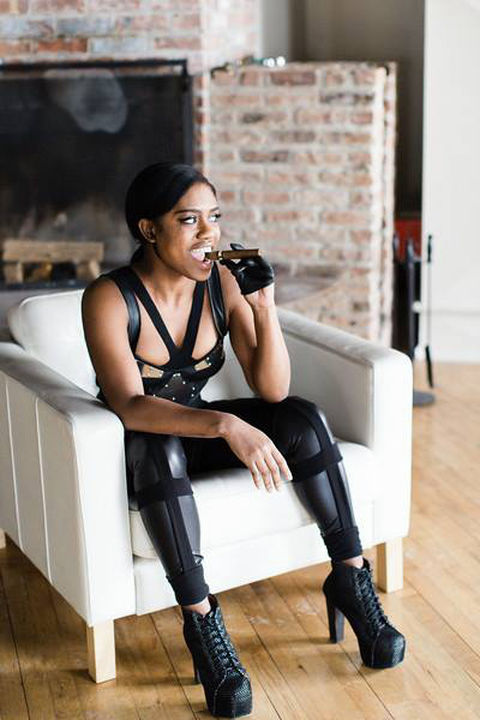 Farrah tell us about your root, where are you from and your childhood?

I was born and raised in little Haiti Miami, Florida and am of both Cuban and Haitian descent. I was raised by my mom who was a huge music lover and listened mostly to Latin and Haitian Bands. When I was five years old she took me to see Julio Iglesia at the Orange Bowl. It was love at first sight I knew from that moment I wanted to be a performer. Growing up as the only child I had a pretty vivid imagination and still do to this day. I would gather all my dolls, skates, pots, pans and prop them up on the front steps of my house and pretend it was a stadium filled with adoring fans. I would use a palm tree branch as a mic and perform for hours. I just knew I was going to make it one day.

Why hip hop and not jazz or other style?

Jazz is definitely incorporated in my sound I call it bossa noir. It’s a combination of bossa nova & hip hop that produces a dark tropic sound with clave’s, percussion, acoustic guitar and bass. When I moved to New York in the 90’s and heard the rap group Digable Planets that’s when everything started to take shape for me, it was the combination of jazz & the boom bap that lured me in and ultimately falling in love with hip hop.

What makes you different from other hip hop female artists?
I’m different overall in a sense that I’m not the same person I was yesterday. I love to learn and implement what I learn right away. what ever you learn either changes your perception enhances it or will replace it with a new one, therefore it’s impossible to be the same person when your are constantly growing and evolving. I respect all Artists male or female. We all serve a purpose and our differences are what makes us unique.

How do you combine your song ( hip hop) with your Afro-Cuban and Haitian heritage?
As much as I love Hip Hop I never quite fit in, it didn’t allow room for growth the box was small and at times suffocating. I had so much more to offer but it intersected with other genres, so at the round table meetings at record labels there was always one question left unanswered how do we market this? I refuse to settle and dumb down my music it would defeat the purpose of my journey. I had to go back to the drawing board several times and in 2013 I decided to release a tribute to Hip Hop called  “New York State of Mind” over Nas classic track. It was a homage to Hip Hop where I’m portraying seven different characters all representing the different dimensions of Hip Hop. After the release I bid farewell and off I wen’t to discover my true sound. I landed a two month residency at Farafina and launched a weekly series called Experimental Box alongside my trio The Three Kings featuring Andre Cleghorn (Bass), James Preston & Kwami Coleman (keys) and Eric Brown (Drums). We played vintage films on a projection screen during the set curated by my partner actor/film buff Nasser Metcalfe. It was there were I found my sound and on March 11, 2016 I coined my new genre called Tribal Hop. It’s a World Avant- Garde approach to Hip Hop that’s abstract, organic, spiritually rich that honors my Afro-Cuban & Haitian roots. It’s a home where other tribes can co-exist and people from all walks of life can create and celebrate their diversity.

What’s spirituality means to you?
Spirituality to me means being present. The universe sends us miracles everyday but you have to be present to truly receive them or you will miss it completely. By being present the universe will reveal what to do and what not to do. Long story short everything is in the present because that’s the only thing that exists. The present is the present.

Where your inspirations come from?
My inspirations come from all over I am a sponge I can be inspired by a Tibetan poet typing out free poetry on subway platform (true story) a walk through a gallery or museum. A cool fun filled night in the city listening to dj’s spin. An incredible dinner or a midnight stroll down convent smoking a cigar. My inspiration comes when life is happening all I have to do is look up it’s everywhere.

Are you married? do you have any kids?
I’m not married yet and I have kids all over the world that I have yet to meet. They need my help and my love. Hold tight I’m coming.

How is life for a singer in the heart of Harlem?
There is absolutely no place like Harlem it is indeed the birthplace of my Artistry. It was Harlem that opened up my ears musically, it was Harlem that loved me back and believed in me. When I was awarded the Maya Angelou Harlem Renaissance award (Founded by Alain Enoch and owner of Chéri) it meant so much and resonated deeply to be chosen by group of your peers who genuinely want to see you win is truly something special. I’ve collaborated and worked alongside some of Harlem’s most  influential people such as Marcus Samuelsson,  Musa Jackson, Freddie Lieba, Epperson, Marsha Bonner the list goes on and on.

Who is your role model?
My role models would include Sade for her grace and simplicity, you can feel the love and strength in her music. She is my breath of fresh air. Phylicia Rashad the mother of all mothers who perfected the art of being a women balancing the yin and yang effortlessly. Who is by far one of the most talented actress of our time. Last but not least my mother for showing me how to be a “G” smoke my cigars, speak my mind and fear no one.

Tell us about your up coming projects?
My upcoming projects include growing and nurturing Tribal Hop, releasing a new LP, collaborating with global artists, touring all over the world and staying present for it all.

Farrah Boulé at the Silvana's in Harlem