DJ, publicist, and performer Hard Hittin Harry has known success and popularity throughout his life, but–from the very start–it hasn’t been smooth sailing.

Earlier this month, I met Harry at Grandchamps–a newly opened Haitian restaurant in his current neighborhood of Bedford-Stuyvesant, Brooklyn. As he happily chewed on familiar flavors, Harry shared the ups and downs of his story–the short version he assured me. Still, we began at the tempestuous beginning.

Harry came into this world as a massive hurricane named Inez ravaged Haiti in 1966. “And I remember that. . .” he said. “As a child, as a kid, I really really remember that. And I always had the vision of rain and wind and just calamity. . . And years later my mom and my aunt told me, ‘You were born during a hurricane.’”

In Haiti for just three more years, Harry then moved with his family to Brooklyn, NY where his parents soon divorced. Then it was onto Canada with his mother before finally settling down in New Jersey. Growing up, Harry was ridiculed for his Haitian heritage and skin color. As an adult, he faced multiple setbacks in the difficult business of music. However, Hard Hittin Harry has always managed to, not only weather storms that come his way, but emerge from them on a more successful course than before. 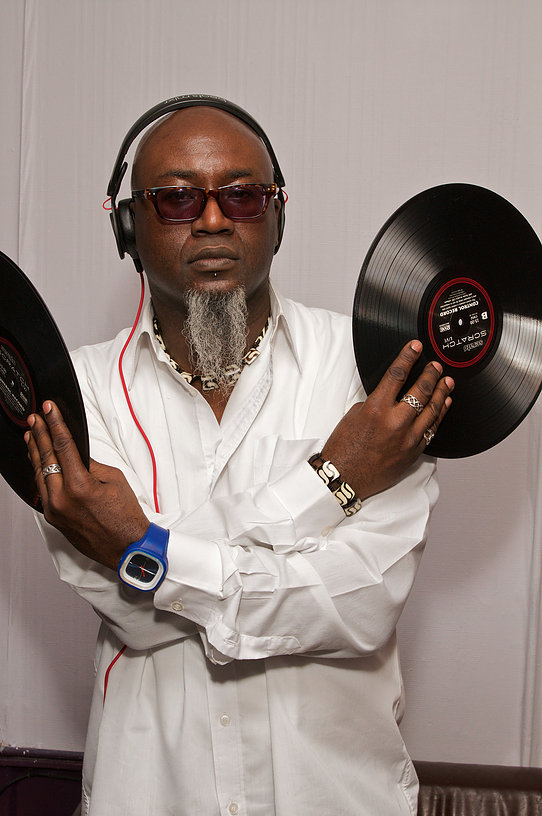 Although life wasn’t always easy for a Haitian-American kid in the ‘70s, Harry always found joy and, as he grew older, local fame with music. Surrounded by a vast variety of sounds–from the Konpa and Zouk music of Haiti to R&B, Funk, and Soul to Classic Rock, to Disco and Freestyle–Harry immersed himself in music. Radio became a particular point of interest as he entered into his teenage years. “. . . Radio was a big influence in my life,” he said. “I listened to early AM stations that played early Rock. . . Then I got into the stations that started playing Disco and Freestyle. There was a station called 92KTU that came out back in the day. . . It was called Disco 92. It had a lot of classic DJ’s that played a lot of Disco, a lot of Freestyle, a lot of Dance music. So I listened to that station and, at that same time, WBLS. We had DJ’s like Frankie Crocker. DJ’s like Mr. Magic. And there was 98.7 KISS back then as well. And then you had DJ’s like Red Alert, Marley Marl, and all those DJ’s. And so I listened to those DJ’s and what they played. It was a big influence on me. . .”

His radio interest peaked and already known around school and his community, especially for his breakdancing skills, Harry started buying equipment and records with his friends, and successfully embarked on his DJing career, spinning at high school functions, college parties, and weddings.

When high school ended, Harry’s interest in music and DJing did not waver. Determined to become a radio personality, he located a nearby business school that offered specialized instruction in radio announcing. While he gained hands-on training there, his teachers warned that getting aired anywhere in the tri-state-area straight out of school just didn’t happen; New York City being considered “major market”. Harry thought differently, “I don’t ever take no for an answer,” he said. “No one can ever tell me you can’t do anything. That’s just not my mind set. I said I’m going to be in the New York City area.” And that’s exactly what happened.

Working a day job at a bank, Harry fortuitously met a temporary employee–at the bank for just a couple of weeks–who invited him to become a part of a community radio show called Quest Community Vibrations, which aired on a Seton Hall University station that could, in fact, be heard throughout the tri-sate area. Airing early Sunday mornings, the show involved not only hosting, but training high school students in broadcasting as well. Harry explained the great things he was able to do both for his own career and for others with the show, “I taught the kids, taught them what I knew. I created mixes that I played on the air, so now people could hear me. I developed relationships with record companies to send me music. . . so now I started getting music for free. And I started bringing my people in the community–like people that I knew that were artists or up-and-coming rappers stuff like that–onto the show as guests. So I gave people in my neighborhood exposure. I became extremely well known in my community in Jersey as an up-and-coming DJ and someone that, you know: Hey, do you want to be on the radio? Go see Harry, he’ll put you on the air.”

Quest Community Vibrations, however, was only the beginning. Through a mutual friend, Harry secured an audition with an up-and-coming group called The Fugees who, of course, eventually garnered national and worldwide acclaim. Harry recalled, “They [The Fugees] had just gotten signed to Columbia-Sony, so they weren’t The Fugees that everyone knew at the time. They were kind of low on the totem pole at the label. . . So they really constantly had to prove themselves. So they had to do a lot of shows. They had to do a lot of showcases for the label. They had to do a lot of free shows. So they needed a DJ, so I auditioned for them, and I made it.”

Harry’s time with The Fugees was a great experience that did not, however, last very long. He was dropped from the act. Harry explained, “. . . they needed to make certain decisions that were good for them at the time, and it probably had nothing to do with me personally. . . I was young. . . at the time I think I didn’t see the bigger picture. I was, more or less, thinking, ‘Well, it’s all about them [Lauryn, Wyclef, and Pras]’ because it was. . . It was more about the three of them. It didn’t really include me, and I think I wanted to be more than what they were willing to give me.”

Now jobless, recently divorced as well, and living in his mother’s basement, Hard Hittin Harry hit a low point. Then a call from a friend set him on a whole new exciting career path. Harry recalled, “. . . I got a call from my boy that worked at a PR firm. He was like, ‘What are you doing right now?’ I was like, ‘Nothing.’ He said, ‘I work at this PR firm. Have you ever done publicity before?’ I was like, ‘No.’ He said, ‘Well, I’m looking for an intern. You could come to Manhattan.

PR was a job that Harry took to instantly. He was hired by the firm after just a month of interning there and went on to become a senior publicist. However, this was a good thing that was not to last either. While working there, Harry received an offer for a side-job. Famed rapper KRS-One was going on tour and approached him to personally handle publicity for the tour. Unwilling to leave his job for a temporary gig, Harry spoke to his friend–and future partner–Lisa “Chase” Patterson about what he should do. She convinced him to accept the offer and let her handle the tour, while he acted as silent partner. This arrangement was successful and led to future gigs, but Harry’s boss found out about his side-work and subsequently let him go. “. . . I was literally crying when I left,” Harry admitted. “Like, ‘What am I going to do. I just got fired.’ So I called my partner. She was like, ‘Good, now come do your own company. . . It’s about time. Come do your own company.’ So we named the company Meridian Entertainment, and that’s how I started my own company.”

Harry and Lisa eventually secured space in New Jersey where they both lived and ran Meridian Entertainment, a business venture that would last for ten years and lead to work with some of the biggest names in entertainment and business, including Wu-Tang Clan, Burger King, and Island Black Music.

Today, Harry lives in Brooklyn with his girlfriend and 14yr old daughter, back on the radio and hosting Global Jam Sessions and Haitian All-starZ, which airs every Tuesday night into Wednesday morning–midnight to 2am EST. Harry explained what Haitian-All-starZ means to him and aims to do for others, “I love the show. Because I’m Haitian it allows me to really explore all there is to know about my culture of Haiti and also empower others, empowers Haitian-Americans–Haitians that are born here, not necessarily in Haiti–that want to learn more about Haiti. So that’s what the show is about. We speak English on the show–English and Kreyol–but it’s mostly English because, again, I want to entertain and empower the people that are listening and that want to know more about Haitian culture–and not just Haitians, but non-Haitians, people who want to know more about Haiti.”

In addition to his work on Haitian All-starZ–facilitating a type of public understanding and pride that he did not have access to when he was younger–Harry promotes and performs with a band called The Earthman Experience and DJ’s at several popular venues around New York City, including Red Rooster and the Apollo Music Cafe in Harlem and Bed-Vyne Brew and Vodou Bar in Brooklyn.

Feel sexy in any size