Just back from Canadian Music Week in Toronto, Paul Beaubrun and his band Zing Experience hit Brooklyn’s Roulette Theatre last month. After staying with his friend and South Sudanese-Canadian musician Emmanuel Jal and bringing some Haitian music north, Beaubrun was back in NYC performing as special guest of Haitian Roots band Lakou Mizik.

Beaubrun was born in Haiti, the son of Theodore “Lolo” Beaubrun and Mimerose “Manze” Beaubrun, founding members of legendary mizik rasin band Boukman Eksperyans. His parents infused traditional Haitian Vodou music with Rock and Roll and brought a call to political protest around the world. When asked what it was like to grow up and become a musician as the child of such powerful music, Beaubrun responded:

It feels like I didn’t really have a choice. It’s like drinking the water. . . . The first part was music. That’s the first thing that I learned. I didn’t know about the message, them being as protest songs. I didn’t understand when I was really small, but the first thing that I remember . . . was the sound and the music and drums, a lot of drums playing. . . . My first instrument was Haitian drums. Then as I’m growing up, I’m listening to their message . . . . It’s something when you listen to Boukman. . . . When I’m listening to them, it’s like so spiritual, at the same time political. . . . It talks about the situation of the country, and it’s like: this is news. . . . Every year in Carnival people are waiting . . . for Boukman’s song so they can know what’s happening in this year. So I grew up with that, and it’s natural for me to sing about what’s happening, about spirituality, about love.

In response to many mainstream interpretations, Beaubrun added, “. . . Vodou music is not the devil music. When they say Vodou, it doesn’t mean bad. Vodou means spirit . . . Vodou is love. That’s what I was raised in—in love.”

Tracing the emotional power of Blues to its African roots as well, while being influenced by players from Robert Johnson to Eric Clapton, and having grown up, of course, with the elements of Blues upon which Rock and Roll was founded, Beaubrun’s music is a unique melding of Blues and Haitian Roots music, which has brought him growing success. His album Vilnerab, released in 2015, reached #1 in the iTunes World Music category. Beaubrun related that it was not a desire for success, however, that drove the creation of Vilnerab. He explained:

Honestly, it was like therapy for me. At the time, I needed to express myself. . . . I had a lot to say, and I had a lot to express, but I needed to make it raw. So what we did—it’s me and [points to bass player Yves “Chico” Boyer ]—we sat down, and we produced that whole thing together. But the way we did, I sat down with the guitar and the mic live—just raw, vulnerable, with the mistakes, whatever. We wanted it raw, leave it exactly how it sounds. So that’s what we did, and we were not thinking about: Hey, we’re going to do something for success. It was just something real and raw, playing that Haitian Roots with Blues. That was my focus, to bridge the gap, but I did it acoustically. When you do it acoustic, I found that you reach people better with the message, with everything . . . 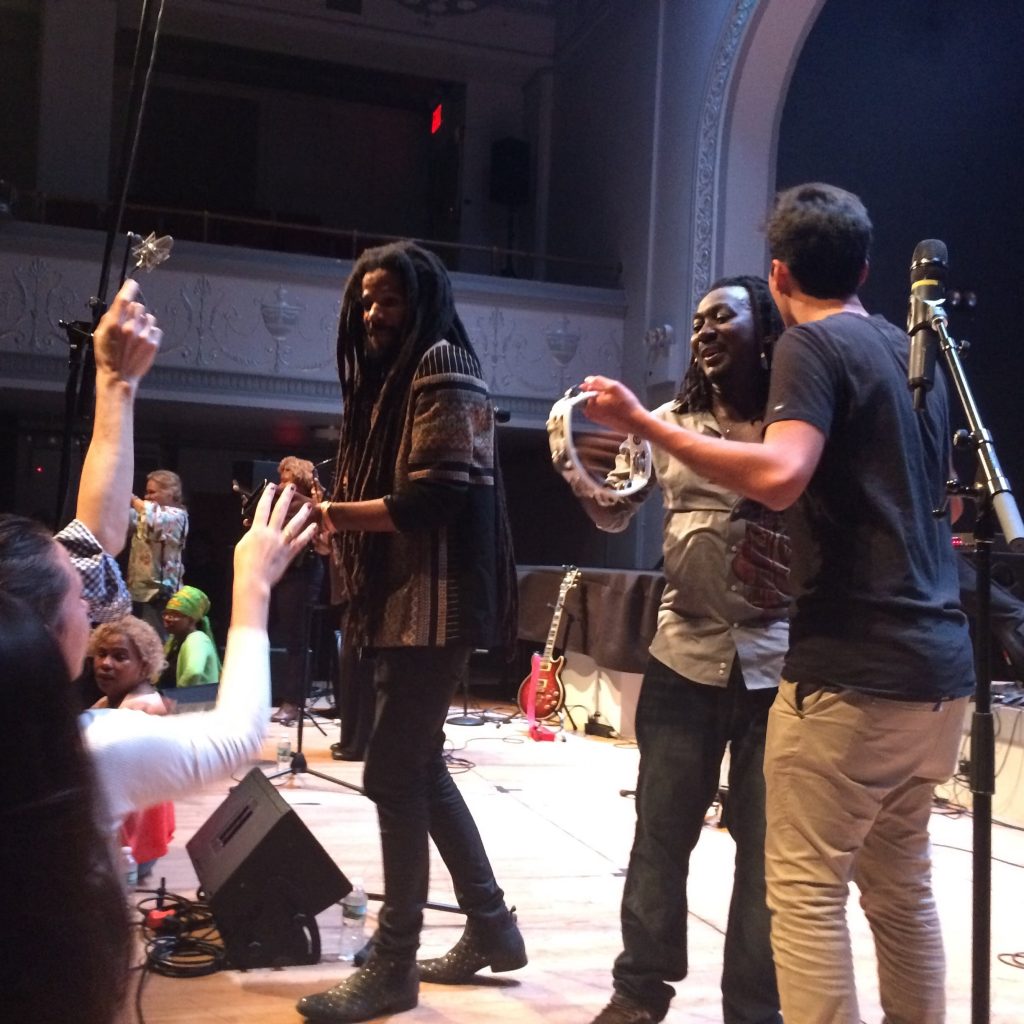 No matter how far and wide Beaubrun aims to reach, however, Haiti remains smack dab at the heart of his endeavors, including his work with the Haitian youth development organization Artists for Peace and Justice, located in Jacmel. When asked how important it is to him to be giving back to Haiti, Beaubrun replied:

. . . to me that’s all that’s important—to give back. That’s all it is. I don’t see anything else more important than that. All that playing on stage. . . all of that. If you don’t give back, to me personally, what are you doing? So, it’s natural to go back and share what you have if someone wants to learn guitar, whatever. You go back and share. What we do with Artists for Peace and Justice; it’s more. It’s like we look at kids, Haitian kids who can’t pay for school, but. . . have talents. . . want to produce or do movies. . . . They get into this school for free, but [it’s] intense. When you get out, you are so good. They are so talented . . . “

Artists for Peace and Justice isn’t just a side project for Beaubrun. In fact, his upcoming album with hall of famer Jackson Browne was partially recorded at the studio there, and all profits will be going back to the organization. Following that album, Beaubrun is set to release a new solo EP as well.

Legendary music his birthright, Paul Beaubrun has picked up the torch and carried on the musical traditions passed down to him from his parents, while creating a magnetic sound of his own.

The audience asked for more...